Why finance education must change 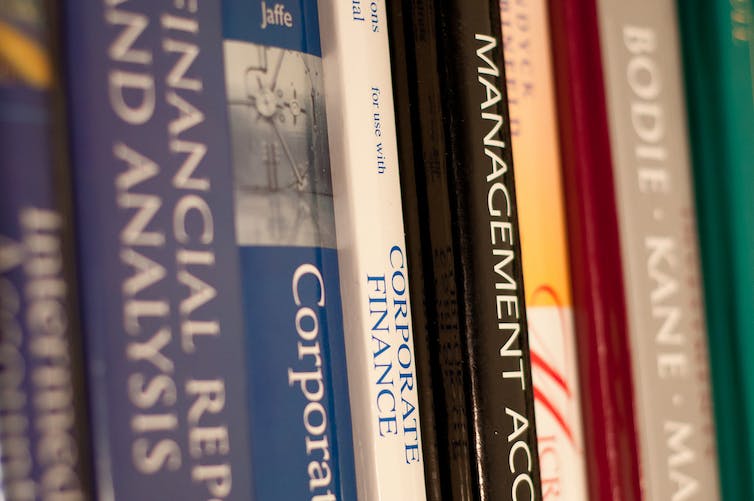 Many finance theories have been debunked, so why do we still teach them?
LifeSupercharger/Flickr

The global financial crisis reopened furious debate about many issues the finance industry once considered settled. But one area that mostly escaped scrutiny is the way universities educate finance students.

Critics have long argued that the theories and models that make up the core of the finance curriculum may be of little practical value. Some say they are even harmful, damaging, and not used by practitioners.

Yet the curriculum remains hardly changed.

We still teach students that markets are efficient. We tell them that stock options can be priced and risk–managed using a model devised by economists Fischer Black and Myron Scholes (the aptly named Black–Scholes Options Pricing model).

They learn that value-at-risk, a model-based number supposedly indicating likely maximum future losses based on past historical data, is dependable. None of these, as crisis after crisis has shown, including the 1987 crash, the 1997 Asian debacle and now the GFC, can stand the real tests.

We also remain proud of our Nobel Prize winners like Harry Markowitz, William Sharpe, Myron Scholes, Robert Merton, among others, even when the presence and aptitude of two Nobelists together—Scholes and Merton—could not stop the demise of Long Term Capital Management (LTCM), the giant US investment fund.

Academia indeed changes very slowly. Remember the “Phillip’s Curve” of the 1960s? The much celebrated tool, which proclaimed an inverse relationship between unemployment and inflation, failed the test with the onset of stagflation in the 1970s. But it took another 10 years for academia to let it go.

Any argument to keep finance education as it stands must dispute the observations of Nassim Taleb, the author of the Black Swan – a book acclaimed as the most thought-provoking of finance literature in recent times.

In what Taleb calls a “Mediocristan world”, existing finance theories and models are fine. They will work. Here, rare events do not exist. Randomness is highly unusual, and the range of possible uncertain outcomes is very limited. Consider the odds of finding a 10ft tall man. No matter what you do, the probability remains insignificant.

But the theories and models do not work in what he calls an “Extremistan world”. Here, rare events, which Taleb calls “black swans”, do exist.

Unfortunately, the world of “black swans” is where the epitome of finance, the financial markets, reside. Assets can halve in value in no time. Stock markets can crash in the blink of an eye. And we either don’t see it coming or are ill–prepared. Losses can be catastrophic.

Caveats to current understandings of finance are the answer, one might suggest. But the fundamental problem remains: how do we predict how actions in the finance sector will turn out?

How good are our predictive skills? The GFC, among other crises, demonstrated very clearly our limitations to predict.

Moreover, the consequences of a black swan event could be as devastating as the GFC-related mayhem. We lose our jobs, houses, dreams, shirts. Businesses collapse, governments become debt–ridden and economies crumble. And, many say, it is not over yet. The worst is still to come.

Perhaps they will. Perhaps finance will be able to assure the business world and society at large that its models are dependable in any situation. Perhaps, as with medicine, finance models will be able to detect problems early and rectify them systematically, with substantial damage control to business or society. Perhaps, there is a chance.

But if we accept that further tweaking, fine–tuning, refinement and help from other disciplines will not make much difference and yet continue to teach the same theories and models, then we run into a question of ethics—an issue that appears to have plagued societies, governments, businesses, and academia worldwide.

On one hand, ethics is increasingly becoming an integral component of business school curriculum. But on the other, what do our own practices say about our own ethical standards?

How do we deal with this? Critics describe this situation as analogous to a doctor prescribing some medicine to a patient, knowing that there is no guarantee that it will work, or more dangerously, knowing that a side effect could well be permanent paralysis or slow, painful death.

In order for the teaching of finance to change, there must be substantial incentives. An academic’s fundamental incentive is tenure, driven crucially by journal publications and research grants.

A business school’s most important incentive is rankings, driven by the same forces. Journal rankings matter as well. And, the more prestigious journals prefer sound theoretical frameworks and scientific rigor—most of which refer back to the same theories and models. How do we change these incentives?

For a long time, the standard MBA curriculum did not change, despite growing criticisms that business schools failed to prepare students appropriately to meet the challenges of increasingly complex organisations and careers.

Until, of course, companies started to shift their hiring away from MBAs and jobs started disappearing more dramatically as a result of the recent economic meltdown. New courses, innovative pedagogies are now a regular part of the ongoing changing MBA environment worldwide, and reforms have only just begun.

Perhaps finance needs another Ford or Carnegie–like–sponsored exercise. The Ford Foundation and the Carnegie Corporation initiated and sponsored a review of business school curriculum five decades ago. The 1959 reports strongly recommended and charted the path to the current curriculum.

Alternatively, it can wait until the financial sector starts to shift its hiring away from finance graduates, and in the meantime, as critics say, be culpable of misleading society.

Griffith Business School will host a seminar on post-GFC finance education on July 18.